According to Toolband/Army the Tool show tonight in Madison, WI has been cancelled again due to illness.  Presumably Maynard is still not 100%.  There’s no indication if there’ll be a make up show in this case either…

Isis fans can feel a little better though, since due to the cancellation the guys will be playing at the Beat Kitchen in Chicago tonight (19th September).  Doors open at 9:30pm, and tickets cost $12.00.

The final announcement on Toolarmy tells us that the live dates section is back up, and that member reviews can be submitted once again.  No sign of the Australian dates as yet.
Finally, Michael has shared with us his Signed Lateralus vinyl, this time he’s had it framed, and frankly it looks pretty damn good.  He tells me the frame is made from 20mm thick Jarrah.  Here’s one of the pics, for more just follow the links below. 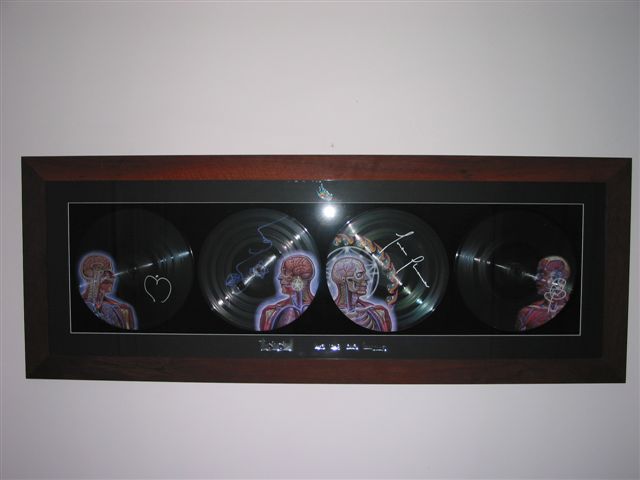 Looks good, but I guess the tricky bit is getting two sets of the signed vinyl!

Any idea how much it cost? (the framing that is)

Yep.
That was the tricky part – i got stooged on eBay from some punk telling me that i was purchasing a ‘sealed’ copy.
Now i have two unsigned Lateralus Vinyls.

but i was not deterred.

ooh that’s gorgeous.
I’ve been considering making one, where did you go to get those chrome/vinyl logo’s made up?

I found the logo, printed it to the size i wanted and dropped it in to them.

The initial digitising is what cost the money…
But now they have the template they can knock them out for about a third the price i paid.

If you are interested, let me know and i can get more made.

oh definitley for sure!

if you don’t mind talking about it more, here’s my msn/email address.
no_loveinfear@hotmail.com

Nice. Better to show off the artwork than keep the sealed copies in storage.

I fully understand this thread is completely dead, but I am going to post anyway.  Mini, I am trying to copy you with your LP frame, and I REALLY want those custom chrome logos.  Can you email if you ever see this?