Tool not recording on a boat

Maynard was interviewed recently by the Star Tribune in the leadup to the River’s Edge Festival featuring both Tool and Puscifer. He didn’t really have much to add to progress on the new Tool album, but did talk about Tool a little more than in other recent interviews:

On what’s taking so long for the follow-up to Tool’s last album, 2006’s “10,000 Days”: “We’ve been brothers for over 22 years, so the personalities are all in check. If you want more information than that, I’m not giving you a dime, because whatever little bit I say always gets blown up. Like, ‘Hey, I hear you guys are recording on a boat.’ No, I mentioned the word ‘boat,’ and I mentioned ‘recording,’ and they were like seven paragraphs apart. We’re not recording on a boat. So I don’t say anything. When it finally comes to it, you will absolutely know where things are with the band.”

On the benefits and disadvantages of having Tool’s only concert of the summer: “I can’t speak for the rest of the band, but I think a show like this is a nice, exciting challenge for any band, something to keep us on our toes. If you don’t challenge yourselves, it’s easy to get lazy as a band. I can’t actually rehearse with them this time because I’m traveling around, but the other guys will absolutely rehearse. We can’t just go out there unprepared and risk looking like a bunch of clowns.”

He also answers a few questions about Puscifer, but nothing we didn’t already know. 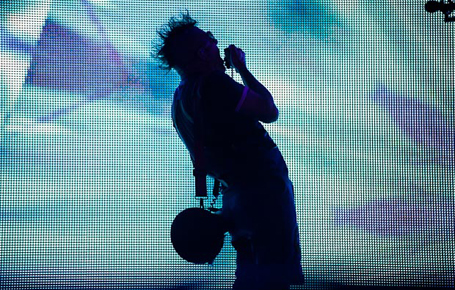 That’s much better than not saying anything.
You know, the common courtesy of the reach-around
Gunny Hartman talked about in Full Metal Jacket.

Pink floyd recorded on a boat once, i think.

Haha, that was excellent!

Holy shit! I didn’t know I could do that.

That’s much better than not saying anything.
You know, the common courtesy of the reach-around
Gunny Hartman talked about in Full Metal Jacket.

Pretty much this right here.

Another gem from Maynard. When it comes to it we will know where things are with the band? What does that mean? Are they still writing? Have they decided not to make a new album? Are they having difficulty completing the album? A little transparency would go a long way. If the guys are having some writers block issues, or maybe scrapped some old ideas for a new direction, whatever the case may be, if they were just honest about shit the fans would understand. Tool fans can be annoying but we are a fairly loyal bunch. I think they… Read more »

Dude, your long ass title is screwing with that post. Knock it off.

Nothing I can do about it. One of the mods gave me the title.

And it’s my shitty HTML that allows it!

woah woah relax Mogg they aren’t giving up on the album. Saying that you will know where they are when it comes out means that the album will speak for itself and be a form of expression without them being interrogated in silly interviews. however, I am looking forward to some great interviews and videos once the album is close to completion…whenever that may be.

Simply put if you are going to remain a popular relevant band, and put out albums at a snails pace, be prepared to cop the interrogation and flack. My life won’t be impacted by anyone’s commentary or lack there of but if I were in that position, for the sake of expediency more than anything else, I’d trott out a few pleasantries and platitudes more frequently than occurs.

If you know how to read between the lines, that’s a pretty positive comment from Maynard that would hopefully alleviate a lot of the worry people have about his commitment to the band.

What I take from that is what I’ve always thought, namely: I still love this band and it’s important to me, but I’m not going to talk about it in every interview because there’s not a whole lot to say right now and I’ve always been pretty tight lipped anyway.

Agreed. The sense seems to be that the album is coming along okay and that they *might* be heading to the studio “soon”, but there is a lot more than just recording that has to happen before the album is in our hands. To me, that seems like enough transparency. It’s being worked on, they have they’re process and they are sticking to it. When they are happy with what they have, it will be recorded and released. I’d rather not know any more than that, and I’d expect (given some fans supposed gripes) that the less known about what… Read more »

I like that line about him trying to challenge himself within the context of the band. When it comes to Tool it does seem like MJK gets detached or disinterested, but I think because he speaks so little about his work with Tool its just easy to draw that conclusion sometimes. His reasoning seems legit though.

The proof is in the pudding, as they say, and if you saw them on any tour the past few years you’d know there’s nothing to worry about.

No boat recordings? Does this mean I shouldn’t expect the band to put out their own cover (and subsequent video) of “Boats n Hoes”?

^ Nachos, lemonheads, my dad’s boat, it won’t go down ’cause my dick can float.

Seeing them in January proved that they can still put on the best live show in the world, and Maynard kicked ass along with the rest of the band. It takes a lot of work to make a new album that improves your craft and challenges you each time. That what Tool has always been about.

Pink floyd recorded on a boat once, i think.

hmmm….. Whats the equivalent of Gilmour Floyd with Tool?……….. No Maynard?

Its official, Maynard is out of the band. Since all of this information is out of Maynard mentioning boat, is Blair really necessary?

if only i could salivate