On Saturday the 31st of October, Tool played a show as part of the Monster Mash Festival in Tempe, Arizona. This post is a meta-review collecting information from a range of sources. Tool fans who attended the show are welcome to post their thoughts and reviews in the comment section below! The show featured a slightly revised set with a large video screen behind the band with a heptagram in the centre. The stage also feature two large screens either side which showed a set of mirror images. No lasers were used for this show, but this was at the request of the local city council rather than an omission from the lighting rig.

The VIP Event the previous day suggested we might hear The Grudge, and we did. It’s the first time the band has played the track since 2002, and I’m sure many would agree is a welcome addition to the Tool set. They also opened the set with Led Zeppelin cover No Quarter. All four members of Tool were dressed as their respective member of Zep, and Adam played on a twin neck Gibson SG. Maynard and Danny stayed in theme for the whole night.

Also into the setlist was Parabol and Parabola. These have been played sporadically in recent years, and it’s nice to see them once more included. Variety is the spice of life they say, so it’s good to see Tool deviate somewhat from the usual setlist. Some may have been disappointed with Lateralus being left out of the setlist – personally I love Lateralus so I hope it’s not a regular thing!

Included on the official setlist was the named of a new track Descending. Before getting too carried away, I expect the title is just a working one, as it’s a revision of a jam we’ve heard in the past 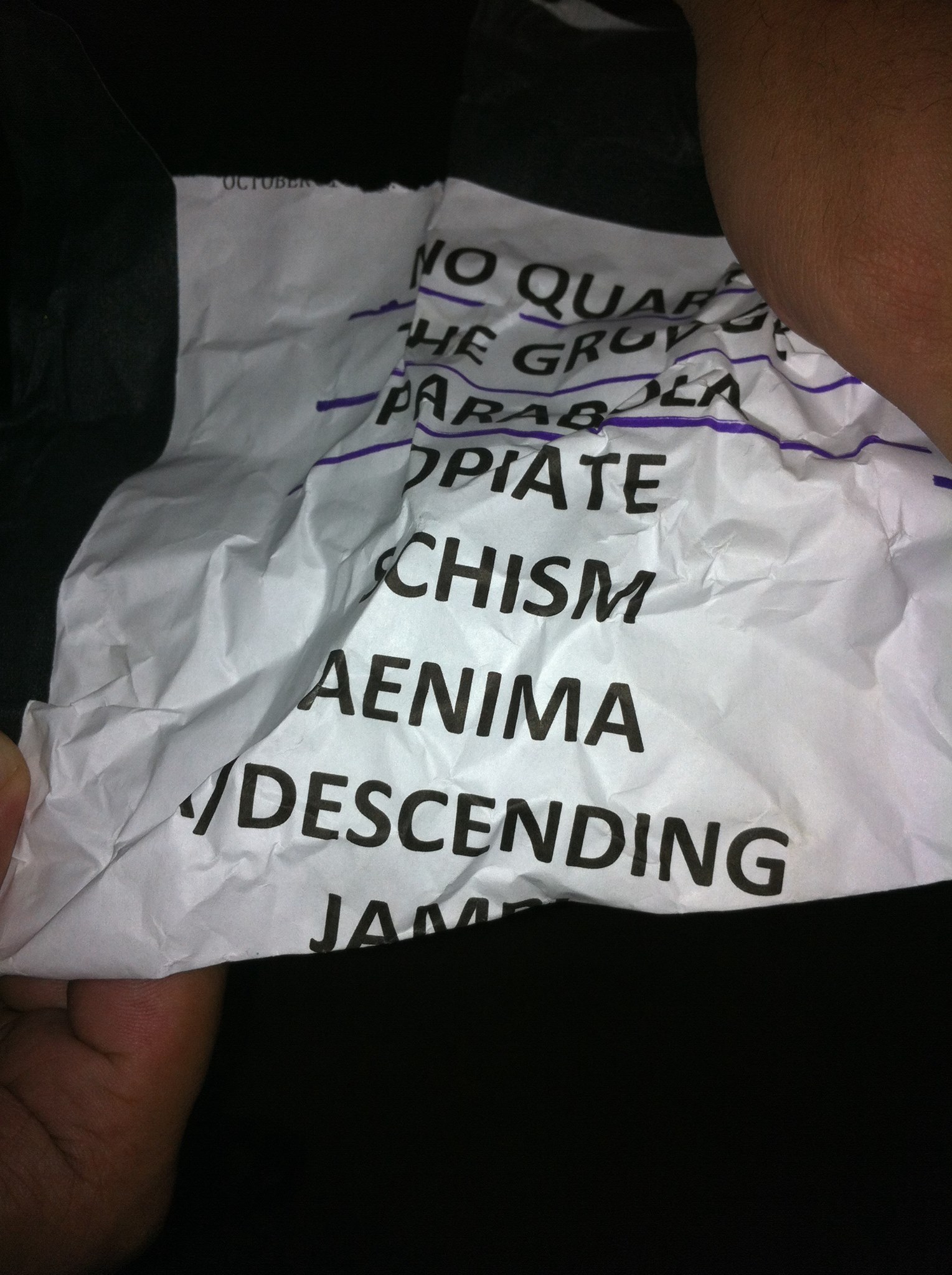 From all reports the crowd and venue were pretty hit and miss. The usual festival problems occured – shitty sound when far from the stage, overly drunk and pushy crowds, expensive beer. Word is the venue was quite full, with around 20,000 tickets sold. This made getting a decent spot for the Tool show difficult, especially if you weren’t interested in standing in front of the stage all day.

*Descending is most likely just a working title for this jam. Would be pretty cool if they had this show professionally filmed for a DVD later on. This show was pretty cool. Is that picture of the setlist the official setlist from the band? Are they passed out at shows? I’m glad to hear The Grudge again. They need to play Rosetta Stoned – that mammoth.

Hm. I hadn’t even noticed Lateralus wasn’t played until you mentioned it.

Was this the first time since it came out that they didn’t play it?

The new track actually has a working title of A/Descending, hard to see in that image though.

I got to the show around 6 pm and was disappointed to find the “bug” t-shirt was already sold out.

The good news is that it’s likely I have one to use as a prize in a coming Fourtheye Subscriber giveaway!

Was Stinkfist the new version with that SUPER SICK ass ending?

One of the best set list I have heard from them. Only problem was the venue in Tempe.It sucks. If you were under 6 ft tall you never saw the stage unless u were right up front. Personally I just listen to the music and enjoy the videos playing during the songs, but even the sound was horrible at the venue. I was just left of the stage and still had trouble hearing Maynard. Seemed that the vocals were turned down too low. This problem seemed to happen with all the bands, not just TOOL. Overpriced beer. Only choices were… Read more »