A Perfect Circle have announced a couple of shows in the UK – one in Manchester on the 12th of June, and another in London on the 13th.  i think it’d be a safe assumption that we’ll see more European dates, I expect some of which will be festivals.  Here’s the poster: 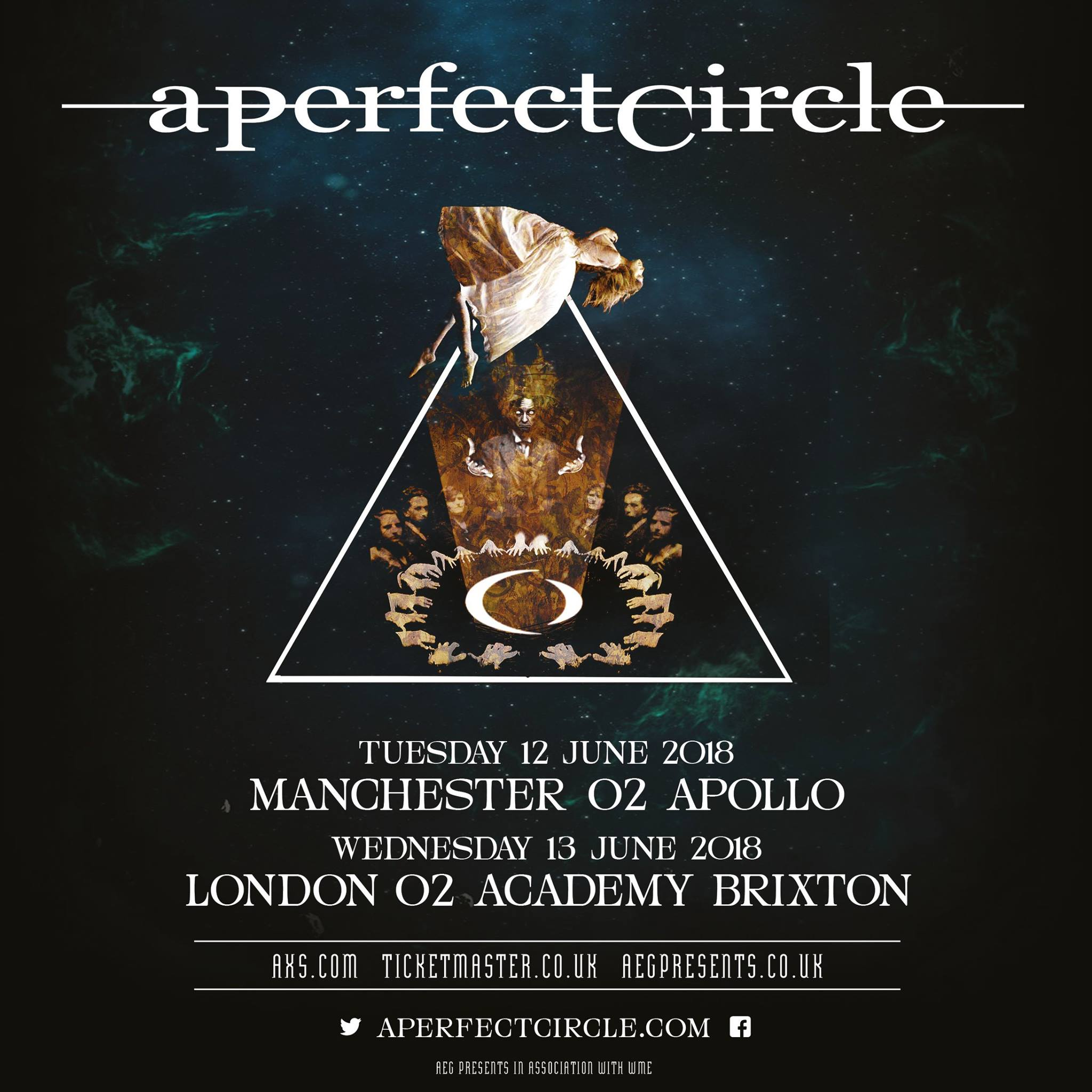 Speaking of festivals – word is the Download Festival is coming to Australia in March next year.  Given that APC seem to be pretty actively touring, it’d come as no surprise to me to see them Down Under around that time.  Stay tuned!

– Band & Maynard both were spot on
– Cool to see Billy actually move around the stage while playing … contrasted w/ Adam
– I’ve seen Tool a dozen times or so in the last 10 years and actually enjoyed this show a bit more at times. It just seemed fresh and they were all really into being there. If/when Tool hit the road again, they need a whole new show … new setlist and lights, etc

When was the last time you saw TOOL? Because their visual show is so on point and cutting edge now there’s nobody that even compares. They have like 4 trucks and a crew to move all that shit around and control it live and NOBODY does that. As for movement on stage, some musicians aren’t into that sort of thing. Some can’t jump and gyrate around and play precisely and some just don’t want to. I wouldn’t gauge a show off of that at all. Adam is on point, Justin moves around a lot and still on point, Danny can’t… Read more »

I saw TOOL last Oct in Denver. I’m not knocking them, just making some observations on how they’re due for some changes. I’m a photographer for some major music festivals so I see a ton of shows every year, and while TOOL’s show is fucking amazing, it’s getting repetitive for long time fans. Movement on stage, again … just another observation and nothing against Adam’s presence which is powerful in his own way. For the setlist, play Reflection and I’ll be happy until we get some new music! And I’ll take your advice on the VIP next time around… PS,… Read more »

Yeah I feel you man. I would totally be down to hear reflection live as well. If only Reflection and Disposition together was a possibility… I saw them twice this year VIP in Sacramento so was right up front for that and then I saw them at San Bernadino. I understand you’re doing photography so I’d argue that you’re too close to really enjoy the experience from a visual standpoint. When I saw them at Golden One Center in Sac I was so close and found myself paying attention to each individual member more than the visuals behind and around… Read more »

I saw them a couple of nights ago and I thought it was a great show. Maynard even gave a bit of a jab at Tool regarding the new album. Nothing major but he said that the new APC album isn’t a rumour and is coming out in 2018.

WIsh I could see them this time around. Hopefully next leg of the tour. The new video for “The Doomed” is out. I thought it was pretty good considering it cost $3 million to make. Maynard looks like he’s ready to spew forth a fountain of wisdom. Was wondering what you guys thought of it?

How about one of those “weekly” updates, hb?

Soon, but not tonight!

3 million? You cannot be serious.

I doubt he is