Tool to headline Rock on the Range 2018

Tool have been announced as one of the headline acts of the Rock On The Range festival, held in May 18-20 in Columbus, OH.  The join such luminaries as Avenged Sevenfold, Godsmack and Breaking Benjamin.  If that’s not enough to get your juices flowing, also on the lineup are much better (but lesser know acts) Quicksand, Baroness, Code Orange and Power Trip.

Oh, and A Perfect Circle are also playing, presumably not on the same day as Tool.

According to the press kit ‘We have one of the only shows from Tool in 2018’ which suggests to me that we’ll see another few shows, I’d guess in the week or so leading up to the festival.  I have no insight into the scope of the tour, but I’d guess it’ll be a short one.

Tickets are on sale now for the whole weekend.  Single day tickets don’t seem to be available at the moment, but I imagine if it doesn’t sell out will do so closer to the event. 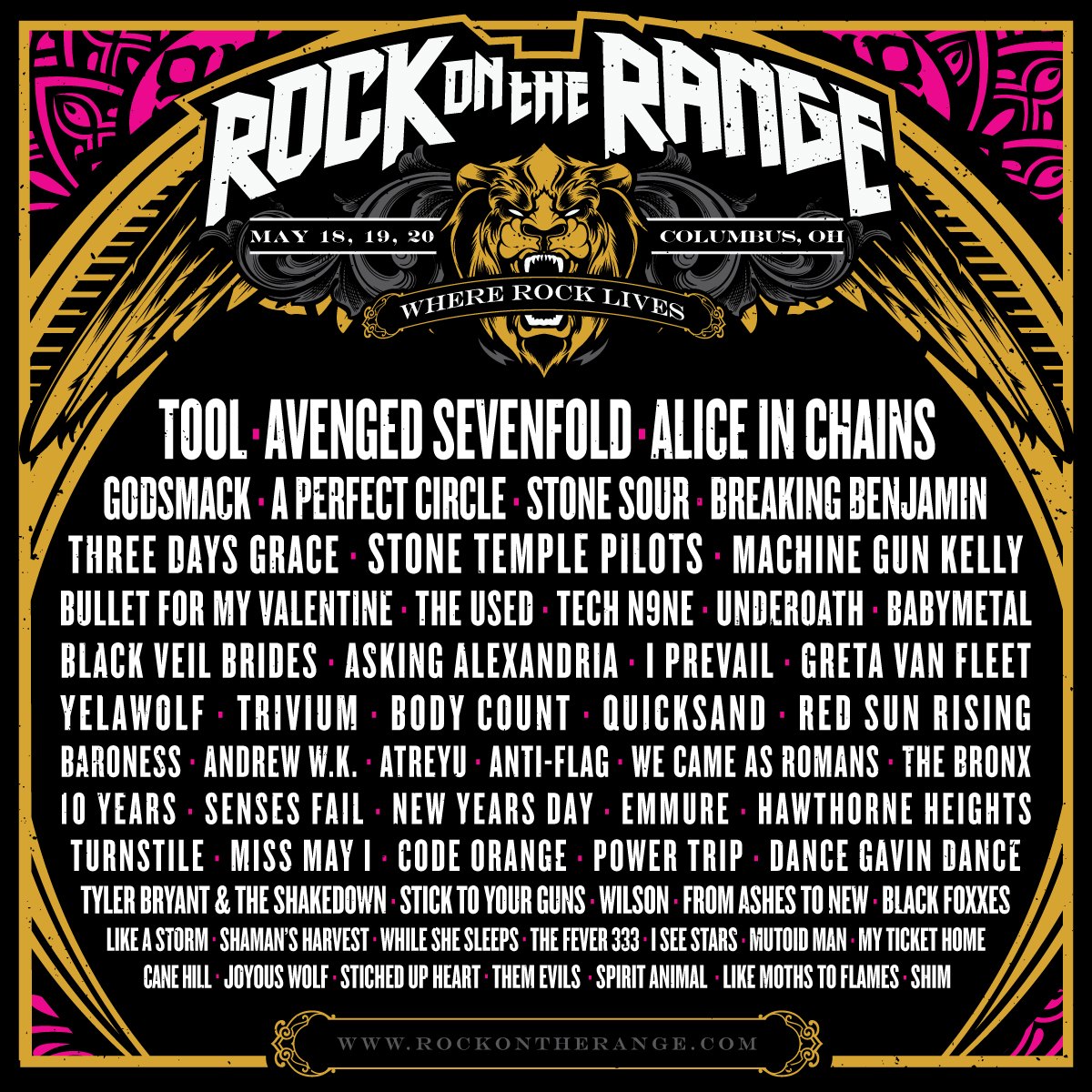 This seems odd. Why would they just randomly headline a festival? I would think they would just try to finish working on their album rather than playing a show (or shows). I suppose some people will say, “They need the money.” I doubt the boys from Tool need the money. Anyway. I hope, for the love of god, they bring some different material to this show. It’s been great that they’ve played The Grudge and Eulogy again, but they really need to spice up their setlist. They hardly play anything from Undertow and Opiate anymore. Albeit, those songs are hard… Read more »

You are expecting way too much on all fronts.

Exactly. You can’t teach an old dog new tricks. You’re expecting a change from a band very clearly stuck in its ways for the last decade and a half

As I said in my post, I think they just enjoy playing live. For me this is what a band is all about fundamentally, so it makes sense. It was slightly unexpected, but I can’t say I find it too odd – it’s happened most years recently.

Would love them to come to Dallas at a time when I have freaking money and take my son. Tickets are so expensive and so hard to get it all has to line up pretty good for me to work out. Nice thing about TOOL sometimes sitting further back in the “cheap” seats you actually see more of the show than you would up front.

I’m instantly disappointed every time I hear Tool is touring. Because to me that means the creative process is being put on hold … again. Maybe I’m wrong, maybe Tool is really good at juggling family life, side projects, millionaire lifestyle, recreation, live concerts, and creating new music. Doesn’t seem like it right now though. Just gotta live long enough to hear the next cut.

I think we’d find that if we added up all the time Tool have available for songwriting, and subtract the time they are touring or preparing to tour, we’d find that it’s a pretty small percentage.

I’ve been a fan long enough to say this will have zero impact on their creative process. They are obviously not working on the new material now and they will equally not be working on it when touring.

As usual, here come all the whiners and complainers, as if these guys owe you something because you’re fans.

Well, the are entitled to voice their opinions. That is not outside of the contract between a fan and their object of admiration.

IMO, some of these opinions belong in therapy sessions. The beauty of this band is they have figured out how to always leave us wanting more. They are just that good.

I love your positive attitude and all that but you do realize that it’s been nearly 12 years since their last album, right? Not only that but we’ve been reading that they’re working on new material for nearly a decade now. I love Tool and their live show is totally amazing but to not expect people to express their disappointment in the lack of progress on the new album isn’t reasonable.

id say bootlickers such as yourself are as equally annoying as the complainers.

i love the low rent “they don’t owe you anything…”. libertarian-esque thought process. as if anyone around long enough truly thinks this.

it’s clear they need the dough. they could easily call it a day and never release another song. and still tour the hits and earn a decent living.

Yeah, I’m sure that’s it, they must be so strapped for cash…it must be a toss up for them to stand on the corner or hit the road again.

Maybe they’ll play Louder Than Life next year As far as a new album, as much as I would LOVE to hear new music, I gave up hoping for something new. Adam & Justin seem to be THE laziest people on earth. Especially since the lawsuit has been over for a couple of years now, they probably can’t think of an excuse for not writing. I just wish Maynard could find some other musicians who are as good as the other guys in TOOL. Wasting talent almost as much as Eddie Van Halen is. Shame. If I had 1/10 of… Read more »

I think it’s pretty cool they do these pop up shows each year. Gets them more live time to become a tighter band. They have been playing pretty damn tight the last few times I’ve seen them.

LOVE IT! Keep going TOOL. New album will get here soon. As for the “money grab” comments… come on guys… they don’t need money.

Totally agree – and that last tour was the best I’ve seen them, hands down. It also seems to point to them being very close to the finish line w/the new stuff…

Tool has been showering us with new tracks for years … the confetti that drops at the end of shows is actually reel to reel tape copies of the new album, coated in red chrome and chopped up into bits. ROTFLMAO

A change in setlist would be amazing. A dream would be the addition of: DRT, Rosetta Stoned, Right in Two, Wings (pt1 & 2). But if we get Schism, Aenima and Stinkfist I won’t be whining about the money spent or that I’ve been duped. Everyone’s entitled to an opinion, but I’m also of the opinion that Tool doesn’t owe us anything. I’m thankful they’re playing together and that the chemistry is still alive. I’m with Hellboy that these baby tours don’t have any significant impact on the creative process, and won’t change how far away the album is. If… Read more »

I might feel ambitious enough to put together a list of every time a member from TOOL gave a release date for the new album in the last ten years. I have people in my Facebook page reposting this shit and all the comments are just so naive. Casual fans just eat this shit up.

Like you said, they reiterate the same thing on a yearly basis. I guess they want new material as much as the rest of us. I’m really curious about the direction they’d take with a new album, and because a lot of things have happened in the music landscape since their heyday, I’m just wondering if it’s even worth putting out a new album ; they’re clearly struggling to write and it probably has a lot to do with the fact that they’re not that musically relevant anymore. I don’t see them redefining their boundaries anytime soon and to top… Read more »

The way Adam spoke about the writing process in the VIP I went to was very positive. They are really trying new things it sounds like and have spent a lot of time carving a path. I think the new material is going to be pretty amazing. Adam’s positivity about it in person made me very confident that when the new album drops we’re going to be blown away. You have to hear him actually speak about it because there’s an excitement in his voice. I feel confident the long wait is not going to matter once we hear the… Read more »

I don’t remember any member of the band EVER saying anything to the effect of “Yes. I’m saying DEFINITELY. We’ll probably have it done in the first half [of the year] if things go as planned. There’s setup times and manufacturing – I can never predict all that, it seems like it’s constantly evolving. [What time of year it will be out] I can’t tell you.”

The album (opus) is coming! How in the blue of an Earthly marble could it not be? Yup, they’re taking their sweet time, carving perfection out of sound, who knows when they’ll be done. In the meantime… get over it!