Adam undertook some more Instagram live streaming yesterday, and while it wasn’t some live cuts from the Loft, it did include a comment that the “Music is done.  Lyrics are coming in hard“.  Great news that the new Tool album seems to be on the home stretch. 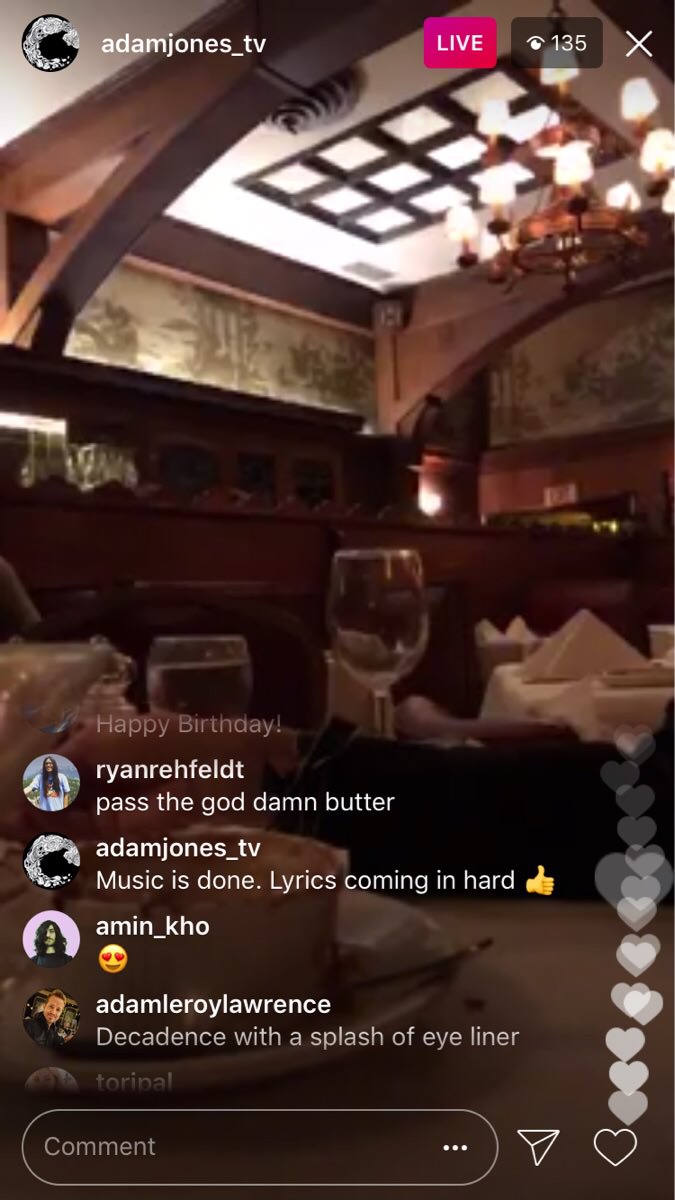 Danny also spoke with Overdrive about the new Legends of the Seagullmen album, and once more suggested that things were happening in Tool-land:

OD – Danny, where are we with the new Tool album? Can you give us an update?

DANNY – It’s all coming together really well. We’ll be hitting the studio again very soon and have a couple of gigs in May (Coachella Festival), so hopefully, we’ll have the album out before that. It’s wishful thinking at this point. I actually think I said that this time last year (laughing).

OD– Do you have a lot of material for the album?

DANNY – Yes, there’s a lot of material that’s already done so, we’re looking to go into the studio pretty quickly here and off we go! Things are just rollin’ along. We don’t just hang about here in Hollywood, we are pretty much working all the time.

There’s a couple of interesting things in that statement.  Great news that it appears they might hit the studio soon.  The suggestion of Coachella and a May release seem odd ones.  I suspect Coachella is a mistake and was added by the author rather than Danny (A Perfect Circle are playing Coachella) and a May release date seems outrageously optimistic for an album not yet recorded.

Awesome I can’t wait to hear it , I hope it’s soon but it’s whatever at this point

I like long songs, but I hope they wrote a couple shorter songs somewhere in the mix.

What exactly was this live stream? I know the other live stream was them playing The Grudge, but what was this one? Does anyone have footage of it?

Are we sure Adam wrote that comment and it wasn’t just someone else with the same username (if that’s possible)?

Has Adam ever live streamed before? These streams seem very random and outta place.

Sorry for all the questions. Just curious.
Get back to me, guys!

it’s in the stories section of instagram. at the very top of the app. the live broadcasts tend to be temporary and aren’t up for long. . and i think that is Musso & Frank Grill (famed LA eatery).

maybe theyre having a celebratory dinner.

Excited to see there is some light at the end of the tunnel with this thing !

Did ya see this?

I watched about the first minute of it before I went to work this morning. Will watch the rest, and probably post about it this evening.