Tool have completed their short run of shows (two festivals in fact) as well as a run of Music Clinics.  Many of you would have seen posts about these here in the forum, as well as places like Reddit.  For those that haven’t, or just want a handy summary, here are some of the key points I’ve gathered from the internet.

The two live shows had the same setlist.  The went more or less how you’d expect – same as last year but with the welcome addition of Sober:

The shows were pretty well received – there didn’t appear to be any obvious visual additions to the sets from what I could see on Youtube videos.  The band sounded to be in decent touch for one that has presumably focused more on new material recently than their old.  Maynard in particular sounded pretty good to my ears.

A few bits of banter during the shows, including Maynard discussing his riot gear, bananas, and the need for the other three to hurry up.  Some media outlets were pretty quick to jump on this so called “rant” as some kind of division between the band, though I imagine it’s nothing more than Maynard joking around.

The Music Clinics were where most of the interesting insights have come from, with many attendees posting their thoughts online.  The clinics took a common format, a Q&A session, followed by a couple of songs – The Grudge and Eulogy.  Some more questions followed, as did renditions of Descending, Jambi and Aenema.  Also played was a new synth heavy drum solo type song, which Danny described as a segue on the new album.  They also appeared to play some sections of Rosetta Stoned.  There was also a screening of 2/3rds of the new Opiate video.

Following the Q&A and mini-concert, there was time for fans to mingle with the band members in attendance, as well as view a range of props and other Tool memorabilia.  There was of course t-shirts, posters and drum skins for sale as well, for those that had some change left over after the $500 entry fee. 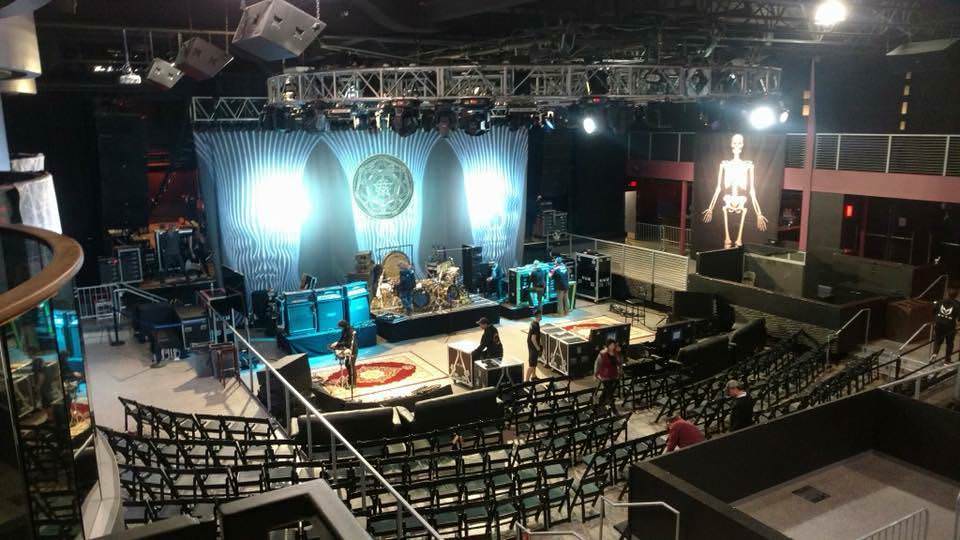 Q&A details found online seem to suggest that fans asked similar things most night – typically things like “how is the new album going” and “what are you listening to at the moment”.  Here’s a collection of tidbits I’ve collected from around the place:

Most reviews of these Music Clinic shows have been pretty positive.  The only comment I would make is that they sound pretty similar to the VIP experience given on previous tours.  It was nice to see the band (sans Maynard) do their thing in an intimate setting, I gotta say I was expecting there might be a little bit more to these sessions.

Adam is mostly finished with recording? That’s a good sign then. From what is known about him, he is the most picky one. Additionally he is a control freak and never seems to be 100% satisfied with anything. so there you go

This is a typo. Justin is mostly done with his parts, Adam and then Maynard to follow.

You are correct – thanks for pointing that out!

Cheers for the updates !

Hmm, so I’ll take a positive outlook here and assume 7 songs at about 10 or mins each plus segues. Could it be 5 or 6 songs on one disc and one long massive continuous piece of music on the other disc? You know, sorta like Wings 1 & 2 or Disposition/Reflection/Triad… Maybe even like what Pink Floyd did with Echoes back on Meddle. And what are some good TOOL songs or pieces of music around 10 minutes in length (or more) we can use for comparison here? Pushit, Lateralus, Third Eye, Wings 1 & 2, D/R/T, Intension/Right In Two,… Read more »

Obviously it’s hard to render too much judgement on the songs we haven’t heard yet, but I largely agree, a good Tool album has a mix of epics and more straight forward tracks.

Despite that, I’m very excited to hear what they have in store for us!

Exciting times here… All sounds like great news to me. I think it’s funny the media ran with Maynard’s comment but definitely expected. The casual TOOL fans will have a lot to say on social media about that I’m sure.

I also like having a couple shorter tracks, but I will take what I get! I don’t think they purposely made the songs long. It just turned out that way.

Agreed. I think we’re in for a treat.

This album is going to kick ass. I know what I would like to hear from Tool, and I also know it will be nothing like what I expect.

Bring it. My hope is some band, any band will copy Tales From Topographic Oceans and DOUBLE it. Not the same thing, but Swallow The Sun ‘Songs from the North I, II & III’ isn’t bad.

It’s funny you mention “Topographic”, because along with “Relayer” they are the densest, most love/hate, and the two of the ‘classic’ Yes period that most grow on you (IMO). I started out disliking Topographic and 3/4ths of Relayer but came to view them as essential in the discography. It’s easy to like Fragile, and Close to the Edge, but those two albums actually hold incredible rewarding experiences to the patient and open-minded fan, and their decadence/craziness/density is in itself miraculous in that it was even ever created or released.

By “those two albums” above I mean Relayer and Topographic — Fragile and Close to the Edge are intrinsically appealing, and both perfect albums, but they are not growers like the rest of the 70s output.