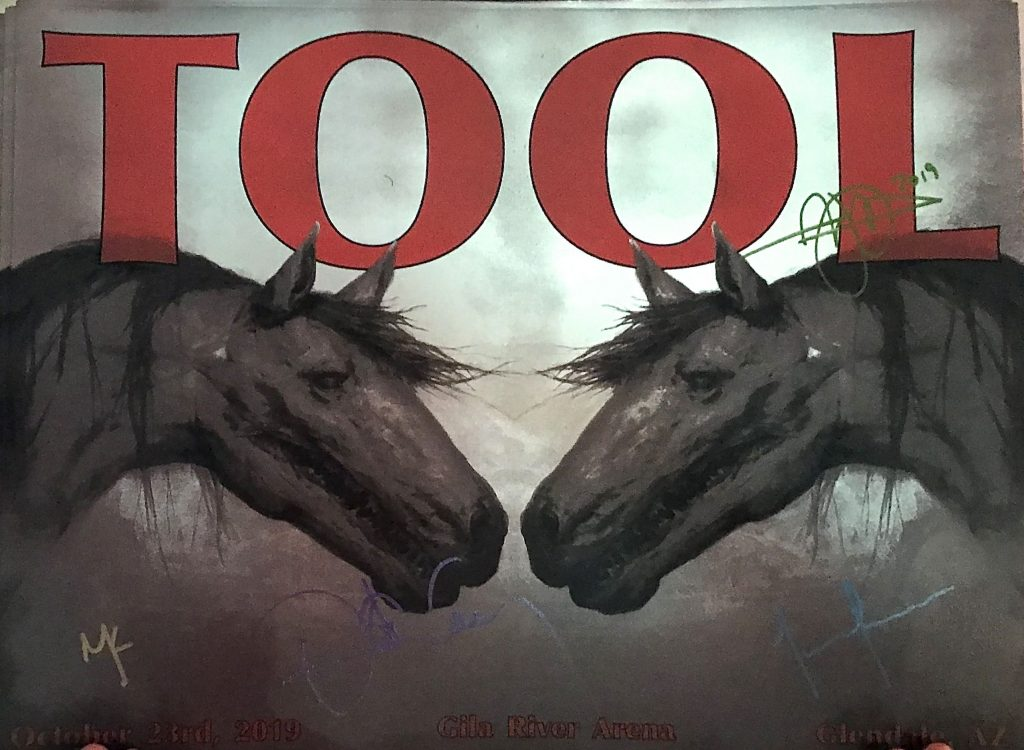 It’s been a while since I’ve posted about Tool Newsletters, and I feel bad. Blair’s a friend and a great supporter of all things Tool, and his stuff is worth reading. He’s posted a couple lately, both of which recount some anecdotes regarding the band, and possibly hint at further surprises to come.

The October Newsletter predictably covers Halloween, and not only contains a few photos of band members out and about and a “spooky” story (perhaps):

Before the show started, I was relieving myself inside one of the venue’s restrooms, when I overheard two concertgoers enthusiastically talking. They weren’t predicting the band’s set list, or analyzing “Fear Inoculum”, but, instead, were comparing notes on one of Maynard’stool opiate Caduceus wines, and doing so in an opaque language that could only be understood by experienced tasters. But, wine aficionados speaking vino vernacular in the men’s room at a prog-metal show wasn’t the scary thing.

There’s a September Newsletter, which is actually well hidden which hints at good news:

I heard one of Danny’s closest friends mention something that was truly music to my ears. Let’s hope it happens.

Who knows what that means. Let our imagination run wild, and imagine Opiate videos, Vinyl remasters and decoy albums. Perhaps it’s some special news regarding a possible Volto! comeback? Either way, that newsletter again features some nice (but small) images of various backstage hijinks, so is worth a look.

That’s it for now, Friday seems to be tour announcement day for Aussie fans, so stay tuned!

They just announced a new extended book version of the album available on Amazon. Figured my friends here might want to know 🙂

Kinda weird? I mean, looks cool. But no screen as per the main release. A booklet with more images and a few lenticular cards (presumably work with 10KD goggles?)

Sounds like this would be perfect for a vinyl release, yet here we are…

I’m sure this will be a nice package, but I’m finding it hard to get overly excited about this one!

Yes starting to wonder why I pre-ordered it now. That package upscaled to vinyl size would be awesome

I’m starting to wonder too. I certainly don’t need another copy of FI, although I’m leaning towards one from COSM that’s signed by Alex Grey

Seems like it’s only a matter of time now until the video from the packaging is leaked online.

Given the recent Massey/Botrill post, I’m putting my non-existent wagers on vinyl reissues.