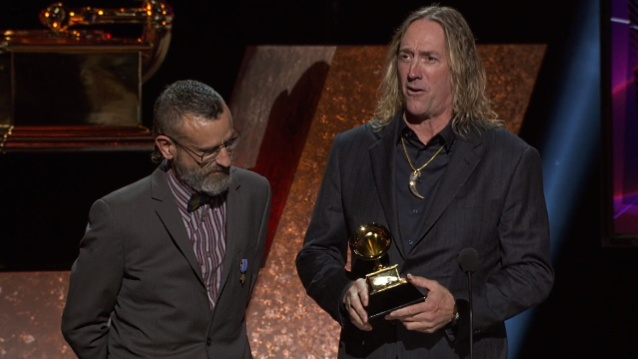 I’m not a huge fan of the Grammy’s but it’s one of the better known music awards around these days, and Tool today won the gong for Best Metal Performance with 7empest. Justin Chancellor and Danny Carey were both on handy to accept the award – I haven’t seen any footage yet, however reportedly Danny paid tribute to Neil Peart. Update: video added!

For those interested, also in the running for the award were Candlemass featuring Tony Iommi (“Astrolus – The Great Octopus”), Death Angel (“Humanicide”), I Prevail (“Bow Down”), and Killswitch Engage (“Unleashed.”)

And a quick followup video with a few more words of thanks:

Even though this is a Tool site, what I say next is objective: those two accepting that award have more talent than the rest of the artists in the room combined. Not just the talent to play, like the house and studio musicians would have, but to actually write something of substance. Sad really.

With you on distaste for the Grammys, although it’s nice seeing the band at least momentarily validated by the industry and contemporary musicians. I still don’t think 7empest is the strongest track on the record (but do bow before its supreme riffage). Maybe the most “metal” or something.

The category they won recognises the ‘performance’ involved, whereas Fear Inoculum (the song) was nominated for Best Rock Song; an award that recognises ‘writing’ of a song. I think 7empest is their best collective ‘performance’ of music on this latest album, but Descending might be a better overall song (better writing/sounding/flow etc.). I can also understand how others might think Pneuma, Invincible or Fear Inoculum are better ‘performances’ or ‘writing’ than 7empest. Best Metal Performance though? I think 7empest best fits this category out of all their new songs. Keep in mind too the bands themselves have to nominate songs… Read more »

Was completely unaware of those distinctions. Thanks!

I really like this song but my only complaint is that I don’t like the second guitar parts during the solos. I would rather hear the bass guitar during those parts. Same thing for Pneuma.