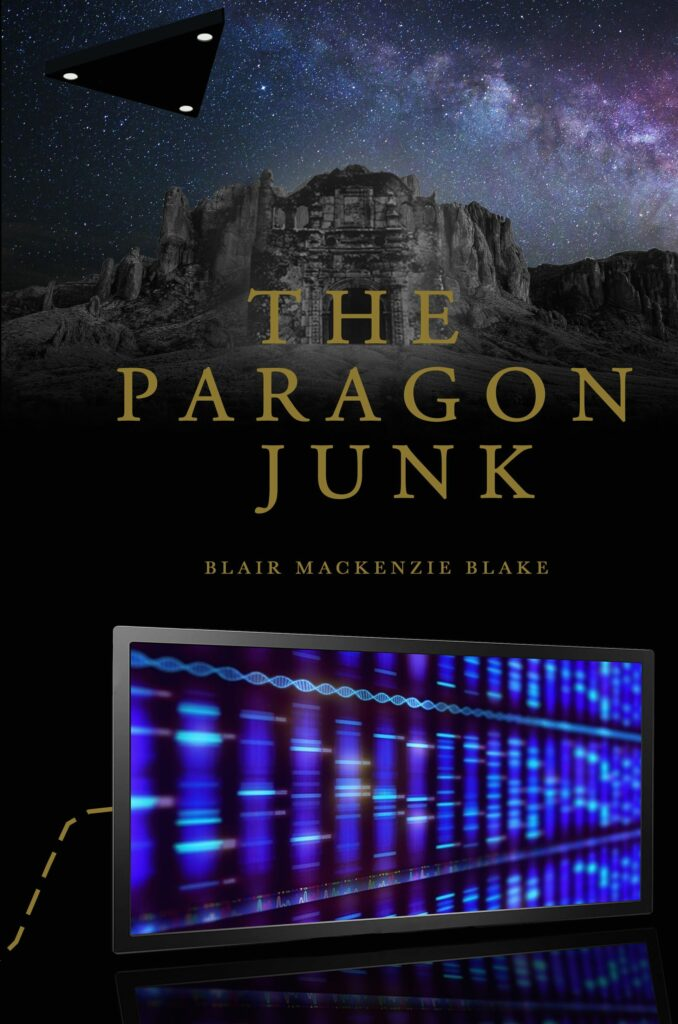 Looks like Blair has been productive during these locked down times, and authored another book to add to his collection. This ones called The Paragon Junk, and you can read the blurb below:

When cryptic messages begin to appear in the blog threads of a noted skeptic of fringe-ologists (especially the pseudoscientific ideas of ancient astronaut theorists), at first the cyber-attacks are dismissed as esoteric jabberwocky trumpeted by the latest Bay Area cult. Before long, podcasts debunking UFO super-believers are also breached with a strikingly futuristic aesthetic that’s as puzzling as the abstruse content. While dealing with these intrusions, there are further problems to contend with at his Silicon Valley condo: the teenage son of his live-in girlfriend has transhuman aspirations and his gorgeous bae (who likes to wear silver spandex bodysuits and perfumes with curious metallic notes) is constantly feeding him a series of mind-melting scenarios, including rumors that his geneticist mom is engaged in covert experiments involving more radical edits to the human genome than are included in Cellectech’s glossy brochure for designer babies. Add to this the shadowy secret society that’s convinced the phantom web messages pertain to forbidden knowledge redacted from the condensed Garden of Eden myth. For reasons known only by the inner circle of Phoenix Orientum, they suspect the zealously guarded means for rejuvenating humanity has been implanted in the skeptic’s head, secured by a nearly impenetrable mind-lock. Being pursued by those with a sinister veneer, while at the same time looking for more prosaic explanations for the paranormal episodes that now plague his daily existence, it’s while reluctantly participating as the “balance” in a documentary by startup Paragon Makings that high strangeness challenges any rational interpretations. What awaits is a fateful discovery that even the blogsite weirdies, paleo-contact luminaries and a mischievous pair of bio-hackers could never have imagined.

If you’re interested, you can grab a copy from Amazon, or from your local online book retailer. Blair reckons these will sell pretty quick, so don’t muck around if you’re keen on a copy

So Hellboi…
What’s been happening with your Spelunking interests?

Glad you asked Maynerd. A couple of things: We’ve been working over on Kangaroo Island surveying the karst near Kelly Hill caves in conjunction with National Parks. The huge fires in 2019 had a benefit in that they cleared out a range of previously impenetrable scrub, so with the help of LIDAR and aireal survery, we’ve been able to document a bunch of previously unknown caves in the area. Heading back there in a couple of weekends time to find more I’ve also been helping organise the ASF Conference which will be held in Ceduna 2022. Focus will be the… Read more »

I think it’s your politicians, not COVID, that are messing with you. I saw an Australian Police Chief actually say that if you go outside, with a mask, you CAN NOT remove it; even to take a drink of water.

“Those who desire to give up freedom in order to gain security will not have, nor do they deserve, either one.” – Benjamin Franklin

I assume you’re taking the piss, or crazy

It’s not me who’s crazy, mate. This is INSANE!

Seems to only be for alcohol. It’s really little surprise Victorians are in and out of lockdowns, when they’re unable to follow such simple recommenations

Excellent stuff.
When do you actually venture into the caves?