Evening started simply enough ... The Mrs. and I hit the city and found a line to get into the beer garden we planned on stopping at on a Thursday night ... FUCK ALL THAT NOISE ... I've never waited in line to get into a bar and we weren't about to start ... walked a few blocks to one of our favorite spots, and it was essentially empty with some solid tunes playing in the background ... Proper Margaritas for the lady and White Rabbit Dark ... the night screamed "WIN"! ...

Strolled a couple blocks and got into the venue whilst an opener was playing what turned out to be their final tune ... not sure who they were, but it didn't sound horrible. Grabbed another round of drinks and headed to the stage ... we easily wiggled our way to the front, just in front of where Maurice (Bass) would set up shop for the evening. The band set up for themselves and did a quick soundcheck with a a bit of banter back to the board and in short time seemed ready to go. I peaked more than once at Jeff's Board during this time and it's impressive. I could only wish to have such toys to tinker with.

I've seen them open for Tool and I was impressed then, but I expected a bit more at their own show, in a small venue, and I got it. They got right into Malachite to start, which is one of my personal faves so the evening continued it's winning ways and didn't slow down. The setlist is below, so I won't do a track by track rundown. Each player was spot on all night. No click tracks, no ear pieces, etc. necessary. These fellas know what they, and each other, are doing at all times. Jason looks at ease with his beastly, tribal abilities on the drum set. The new songs were impressive. For those unfamiliar with them, I tend to think of their sound as a volcano ... a slow, atmospheric flow with bursts of full fledged eruption. They are a deceptively heavy live band, when compared to their recorded material.

I was concerned in such a small place their sound may suffer but it was spot on all night, with the exception of the Bass being a little much in 'Nice Day', the most mellow, ballad-type, of all the tracks they played on the night. Otherwise, that bass tone was something to admire ... like a taste of heaven, with a tough of the depths of hell.

All in all, a solid set, covering 5/6 of my favorite tracks from them, with only 'Resolve' from the new one left to be desired, personally, but no complaints. 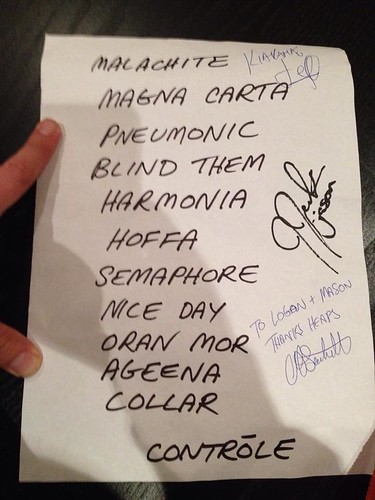 Anyway, following the set, we were completely opposite the exit from the music venue portion of Ding Dong. I noticed the guys just hanging off to the right of the stage and politely requested a setlist from Maurice, who happily obliged and we traded niceties for a moment. We headed to the bar and grabbed a couple more drinks before we were to depart. The venue emptied quickly a part from a few others grabbing a drink and I noticed the fellas were hanging out and signing a few things by the stage as Jason packed up his kit. I figure it could do no harm to have them sign the set they'd just provided and they were more than happy to chill out for a bit and we shared a few beers and chatted away about music and travel and the like. Really, really down to earth guys. Respecting the value of a buck and quite thankful they even have any fans, especially 'after an 8 year lay-off between albums', to which I quipped, "well, at least you guys aren't tool". From there we discussed their tour with them and some of the "cash grab" tours directly related to funding the lawsuit, which in turn led to Aaron Harris's production of large portions of the new record and chat's about touring with Isis, whom each of these guys hold in the highest regard and the new Old Man Gloom and Yob records, etc., etc.

All in all, it was essentially a perfect night out and I'd happily drop double the price to see these guys again ... A+
Last edited by petemasterpete on Mon Dec 01, 2014 2:11 am, edited 1 time in total.
well piss on my tits and tell me it's raining
Top

It does not surprise me that you'd be hanging out at a place called the Ding Dong Lounge.
Don't mow your lawn
Top

I was there too - first time seeing them and definitely lived up to expectations.

Nice dedication of Nice Day For An Earthquake to Phil Hughes as well.
Top

UndKeineZwEier wrote:It does not surprise me that you'd be hanging out at a place called the Ding Dong Lounge.