Movies, TV and other video based media
Post Reply
217 posts

But there is some real BB related news as well...

Kittaan wrote:But there is some real BB related news as well...

Looking forward to seeing it, hope it doesn't suck. Great cast so far.

good news
- You like noisy music?
- Yes. The louder the better. Stops me from thinking.
- You don't like to think? What do you like?
- Never thought about it.
Top

Anybody catch the sneak peek in this week's episode of The Walking Dead?
Don't mow your lawn
Top

Before that - I kid you not - I had no idea what this show was even about. For some reason I had it mixed up with that awful Dexter show.

But I am told it greatly picks up - especially in the third season.

I will have to wait and see. But something tells me it will get better as it goes along.

Not as good as True Detective though.
People like me just want to watch the world burn.
Top

It's definitely a show that picks up over time. As to whether it's better than True Detective, I think overall it is a more consistent show, however doesn't hit some of the high points that TD does.

Both are great shows though, of that there is no doubt.
Top

Binge watched all of breaking bad in less than two months after the show had already wrapped ... Thought it was great so far as TV goes ... I found it addictive and somewhat rewarding for a time suck I generally wouldn't give any thought.

True detective was also swell. Can't say I've invested any quality time in any TV since those two apart from football season.
well piss on my tits and tell me it's raining
Top

Are we gonna post Better Call Saul spoilers here? Cause there seems to be a fair amount of people who are still on BB.

Speaking of Saul, did anyone see the first episode? I did NOT expect it to be so serious. The stuff I'd read leading up to it, though it wasn't too much, led me to believe it would be lighter than BB. Granted, it is barely the first episode.
Hey! Denty!
Top

Why don't you use the Spoiler tag if necessary for BCS specific spoilers as it's obviously brand new. Eventually, I think we should be able to discuss it freely, but give folks a chance to watch the first ep for now.

I think at this point, with BB long since over, it's on anyone still binging to watch out for those kinds of spoilers.
Ki77aan

Spoiler tags are appreciated please. They're easy to use (it's the button in the toolbar that looks like a white box) so no excuses!

BB spoilers are fine at this point, except for if they directly impact on BCS episodes.
Top

The second ep (Mijo) just aired tonight, by the way.

I'll be watching them both tonight/tomorrow. Can't wait.
Ki77aan

I watched the first episode. It was decent. Starts off slow but picks up the pace about halfway through.
► Show Spoiler
Mike
makes a cameo which was a nice surprise. I'm interested to see where this series will go and how violent it will be compared to BB. I'll watch the second episode tonight.
Top

Definitely dug the first ep, and I agree, this is going to be good.

Loved the subtle and not so subtle refs to BB, and I know there are many many more to come.

The opening scene was SO depressing.
Ki77aan

► Show Spoiler
so is this show gonna be about how Jimmy "breaks bad"?
Hey! Denty!
Top

@ RP - It appears so, and that's the way Vince layed it out when BCS was announced, right? How he got from point A to point B...

Watched the 2nd ep, Mijo today (isn't that Maynard's lapdog's name too?). Even better than the first ep.

Some of it was pretty far fetched.
► Show Spoiler
Loved the interaction between Saul/Jimmy and Tuco, but yeah, I seriously doubt he would be played that way.
They really rope you in with the cliff hangers at the end of every episode too, just like BB.

► Show Spoiler
Also, really like Michael McKean as an actor and comedian. The scenes between Odenkirk and McKean have been great, but I expect there will be some amazing acting between those two in the future.
Ki77aan

About the first spoiler

► Show Spoiler
He was able to play Tuco because Tuco is crazy and the other guy had a plan, as the end of the episode showed.
On another note, I never really read much about what this show was gonna be like other than it would be lighter in tone, of which so far...
Hey! Denty!
Top

So far so good!
Top 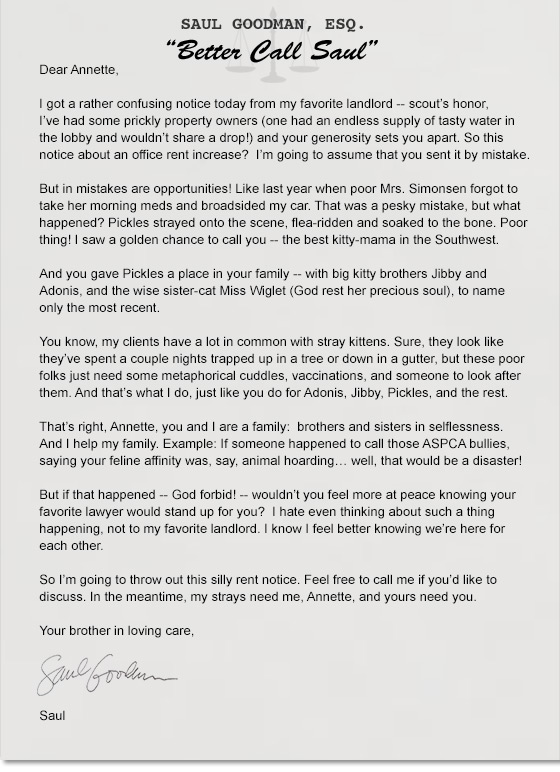 This show is the only good thing on TV right now. Breaking Bad was so good that it made pretty much every other show look tacky. This show has a different tone than Breaking Bad, but it's definitely not a lighter tone. Great fucking writing.
"I'm kind of a big dill." - Schlong Burgundy
Top

Bill Hilly wrote:This show is the only good thing on TV right now. Breaking Bad was so good that it made pretty much every other show look tacky. This show has a different tone than Breaking Bad, but it's definitely not a lighter tone. Great fucking writing.

It's good but it's not that different from BB (so far).

I wonder if I'm the only one that didn't get that joke?