Lucky me I am not noticing that.
Top

Right on! Definitely looking forward to seeing what's in store for future tours.

By they way, I just reread your interview with Blair from the September 2012 Newsletter. Great stuff.

I'd forgotten about that.
Top

concerning the price for the new record outside the U.S.A.: many big bands have their albums pressed separately in europe / asia. this is obviously not possible this time due to the complex packaging I guess. thus all stores have to import the cd.
Top

Fear being the man in the tank...

So the first studio released recording of a new Tool song in 13 years was kind of a crazy journey for me. Tuesday night my gf and I went out for sushi and went to a nearby bar she used to work at. As we were leaving we had a smoke outside and she tripped and fell on a low brick wall and hit her ribs. We went to the ER that night and she broke 3 ribs and punctured her lung. In the waiting room all night waiting for X-rays and a CAT scan the Fear Inoculum single had been released 5am PST. She was so understanding and cool to let me run out to my car and listen to it. I was so tired and worried about her that I really couldn’t properly enjoy it on my iPhone headphones, but I still was moved by it and thought it was amazing to finally listen to a new studio track. She is doing fine, but in a ton of pain of course and most likely will be checking out tomorrow. I just have been working and visiting her and listening to it selectively in my car. It sounds clean in my car, but I really have to crank up the volume on this song compared to any other kind of music I play, maybe I just really want to rock out to it, haha. I get home tonight and listen to it on some noise canceling headphones and goddamn, what a song, it finally hits me hard.

So here are my thoughts on it and wanted to comment on some of the stuff I have read in this thread. So first off, this is Danny’s song, he owns it and is totally the headliner. Some of you have said the symbols are soft/quite, but that to me is only on the first half of the song and I think we can trust Danny to know what the proper levels should be. He got to play around with a lot of fun toys on this song, but he uses them moderately and are really fun to hear new ones after multiple listens.

Justin really is almost the co-headliner. The way Danny and Justin close out this track really ties the song together and sticks the landing for a perfect Tool ending. His bass work is really like no other I have heard. He really is a genius with it and to this untrained musician ear he really sounds different than most bassists.

Maynard brought 4 different vocal styles to 1 song. I dig the “spoken word” part and the so called Puscifer Grand Canyon part and after that he goes to the classic megaphone(stinkfist) sound. The beginning vocals are spooky and beautiful to me and really make it not feel like a typical Tool song. The criticism that I have read that he sounds to much like APC and Pusicfer are funny to me because a ton of people I have read and heard thought the same thing when Lateralus was released. People thought he had changed because of APC, but Maynard is just evolving his vocal style decade after decade and it is silly for anybody to think he would sound like any Tool album in the past.

Adam in my opinion is letting everybody else shine in this track and just really plays a consistent supporting role. He has said in the few interviews that I have skimmed thru that he really goes solo crazy on this album. So maybe (of course I have only heard two other tracks on this album), his riffs that I have read as boring and uninspired, are to let the others be the main focus.

I feel this song is actually a bold choice for Tool to be the official single, again I have only heard Descending, Invincible, and now Fear Inoculum. I think Invincible and Fear Inoculum are really different, but familiar to what Tool has released. I have gotten the Lateralus vibe from Descending and think it’s the most classic kind of mash up song we have heard. I think Invincible would have been a more friendly single to release compared to FI. So I was kind of bummed at first that they chose to release FI as the single cuz that would make 3 songs that I have heard from the new album, but I am still stoked to hear Descending and Invincible’s studio versions. If I have to give ranking on best tracks so for it would be a razor thin 1,2,3, being; Invincible, Fear Inoculum, Descending so far. All great and most likely be surpassing 10,000 Day’s as my 3 favorite album, but it still could make 1 or 2. Can’t wait to listen.


TLDR: please send good vibes to my gf with 3 broke ribs and a lung puncture, FI is such an fantastic first studio single, and bring on the full album. My earholes are ready.

PS: where is the track listing and length times. Silly band, why haven’t released any Info. Stoked to see those if anybody has an idea. Yay new Tool
Last edited by the chill on Sat Aug 10, 2019 2:16 am, edited 1 time in total.
Top

Awesome summation, agree with everything you have written, enjoyed reading it.

People like me just want to watch the world burn.
Top

Jesus man, poor girl. All the best for her recovery bro. And like Pimpie said good summation, enjoyed reading that. Loving the new tune more and more every listen
Listen to All Them Witches
Top

Playing my FLAC version in foobar, notice anything? 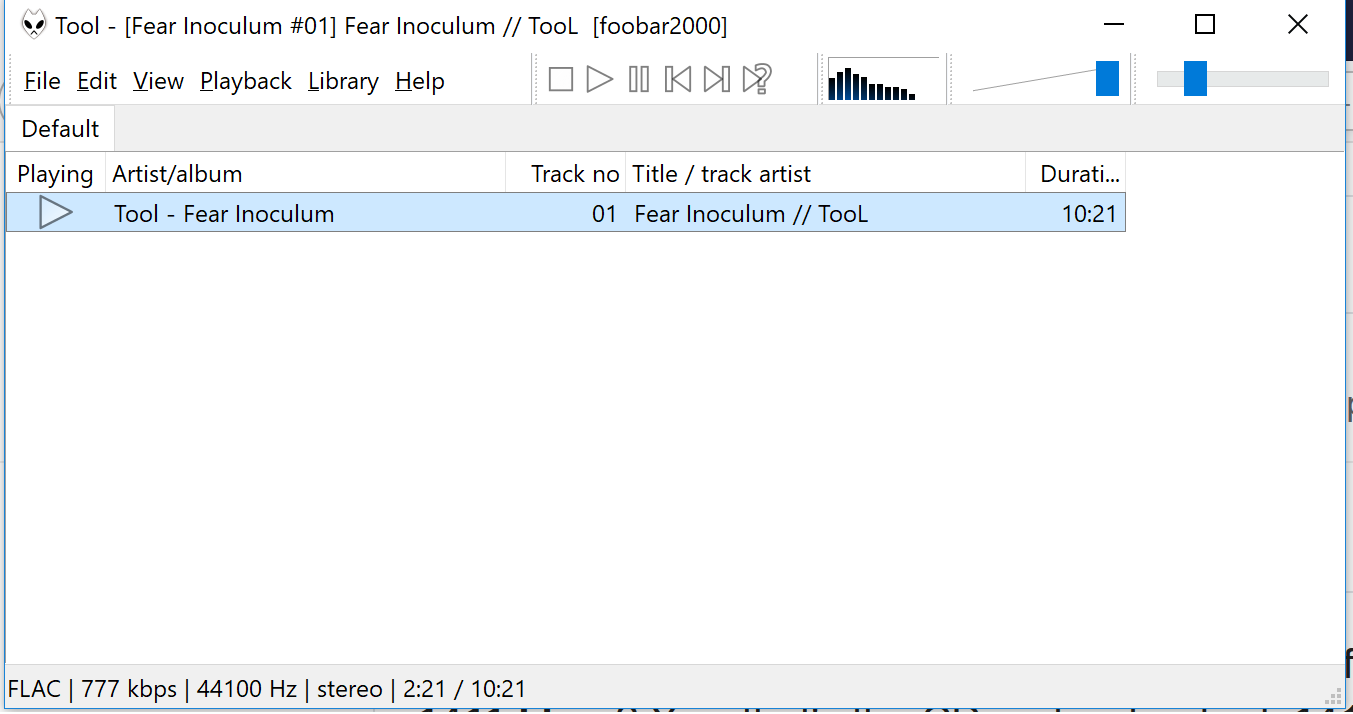 Yeah, the default Foobar layout is awful. Shame on you for not customising that shizzle
Top

VLC has a filter called "karaoke" that does the same effect that ToolArchive used in his Tool unlocked series, anyone wanna try it out? It filters out the top layer or something so you can hear what's going on behind everything. I reckon FI has some neat stuff behind everything, vocal layers etc.

If you use that filter on So Long Thanks for the Fish it sounds like completely different version vocal-wise.
Top

hellboy wrote: ↑
Fri Aug 09, 2019 3:39 am
Yeah, the default Foobar layout is awful. Shame on you for not customising that shizzle

Yeah because this forums layout is so spectacular.

What is he total file size of the flac version you bought?
I know the pieces fit, I studied the numbers in Southern France.
Top

Sick burn.
I know the pieces fit, I studied the numbers in Southern France.
Top

Seriously how fucking mint is this song!!
Listen to All Them Witches
Top

Do you notice much of a difference through say $150 headphones flac vs mp3 or it's more for people with proper equipment?
Listen to All Them Witches
Top

Busty McCracken wrote: ↑
Fri Aug 09, 2019 6:13 am
Do you notice much of a difference through say $150 headphones flac vs mp3 or it's more for people with proper equipment?

I noticed a difference between the files generally. I was in my car first when I heard the flac and it changed my whole view of the production. I can't wait until CD quality is out there. Hopefully we get an HDtracks version too. The real optimist in me pines for a bluray audio release.
I know the pieces fit, I studied the numbers in Southern France.
Top

While I may be inebriated somewhat I can assure you there is a massive difference between my budget sennheisers at work listening to FI on Google Play Music (which was hi def) and an actual FLAC file at home with great headphones and a DAC player.
Canned audience laughter
Top

All I have is an android phone for playing music through earphones, so just wondering if its worth getting flac files to listen to it through a ok jbl headphones or won't be very noticeable ya reckon?
Listen to All Them Witches
Top

I just downloaded Tidal and signed up for the free trial and wow, there’s a massive difference from Apple Music! Damn! I’m contemplating getting rid of Apple Music for tidal but I really like how Apple Music is incorporated in everything including my Apple TV. Fear Inoculum is such a great song! Every listen seems like a new listen. I love when he comes in with “forfeit, all control.”
Top

I cant register for the free trial, and the login via twitter isnt working. No other way to get in. Can anyone help me get the FLAC? I bought the google play version and want better quality!!!!
Yes, I am the same Greasy from the hubs (remember AMT?)

Busty McCracken wrote: ↑
Fri Aug 09, 2019 6:39 am
All I have is an android phone for playing music through earphones, so just wondering if its worth getting flac files to listen to it through a ok jbl headphones or won't be very noticeable ya reckon?