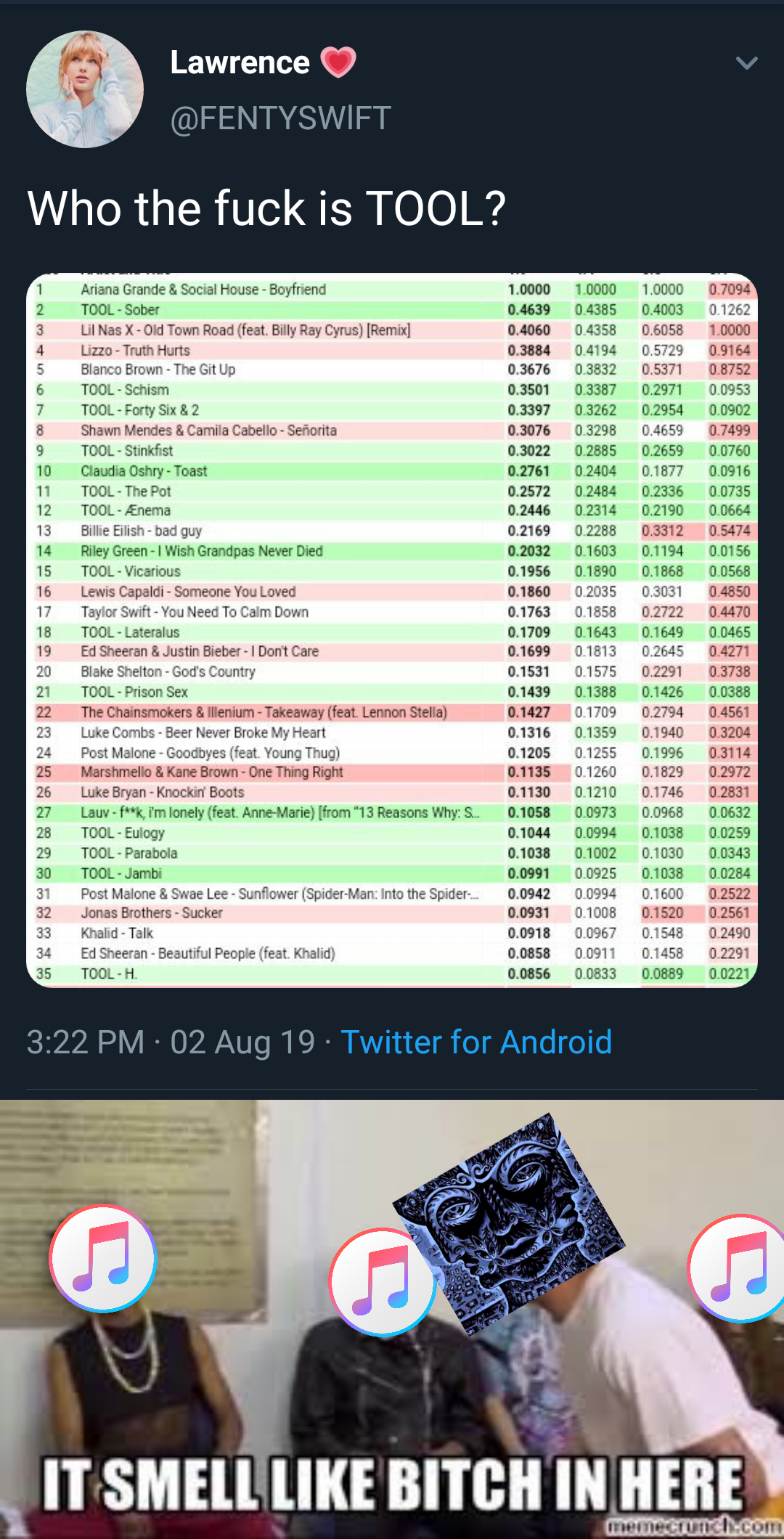 LMAO
- You like noisy music?
- Yes. The louder the better. Stops me from thinking.
- You don't like to think? What do you like?
- Never thought about it.
Top

Busty McCracken wrote: ↑
Fri Aug 09, 2019 10:14 pm
Yeah I haven't listened to them in about a month. I thought the Berlin bootlegs sounded great until I heard studio version of FI. Very keen to hear the studio tracks , especially descending. Could never get enough clarity on Justin's bass from any recording to properly enjoy it.

This is the reason I also stopped listening about mid June. I wanted to Feel those tracks and just couldn’t from the live recordings. Now Getting FI and having it hit to my core Descending and Invincible will crush. Justin sounds amazing on FI can’t wait to Feel that Invincible bass line.
All well Whatever, Nevermind
Top

It's almost a complaint as most Tool albums sound very very different production wise yet this sounds almost inoffensive if that makes any sense. Everyone can be heard in the mix without sounding as sterile as Lateralus did (IMO)
Canned audience laughter
Top

Haha fucking love it! I imagined people having that exact reaction to seeing Tool all over iTunes.
Top

It's almost a complaint as most Tool albums sound very very different production wise yet this sounds almost inoffensive if that makes any sense. Everyone can be heard in the mix without sounding as sterile as Lateralus did (IMO)

Sounds more like a radiohead album production wise. Every tool album sounds different but I wasn't expecting it to be this clean and shimmery and spacey. Fucking perfect as you say.
Top

That outro though when Maynard sings “Unveil now, lift away. I see you runnin'. Deceiver chased away. A long time comin'” is fuckin epic, it sounds amazing on the Bose sound system in my car.

I personally didn’t like the production on 10k Days but on FI it’s amazing.
I forgot my pen
Top

Just another thought on the download card being separate from the cd and people speculating it could be the reworked Opiate, wouldn't that be kind of fitting?

I mean they started their journey with the mantra of 'Religion is the opiate of the masses' and (if it's actually included) they are finishing their record contract and basically the release of new music of Tool as we know them with the same kind of message. I mean hell, it could be also comment on their own intransigence, how financial comfort and success almost ruined them creatively, their very own opiate.
Canned audience laughter
Top

The production is great. It should definitely satify people who had an issue with the loudness of Days.

I don't think Opiate will be on here. I am wondering if they didn't negotiate full rights (if they didn't already have it) with the label and are waiting to use it as an independent test run post this album.
Dan Brown's Fear Inoculum: Best novel ever written, inspiring, worth the wait, not enough yelling, every page reads like the DaVinci Code... 3/10
Top

It's almost a complaint as most Tool albums sound very very different production wise yet this sounds almost inoffensive if that makes any sense. Everyone can be heard in the mix without sounding as sterile as Lateralus did (IMO)

sterile as Lateralus? u on crack ? the only thing i think lateralus lacks is the bass should be a little more prominent. other then that lateralus and undertow are the best sounding tool albums imo. aenima is really the only one id be interested in hearing redone or give me the unmixed files or something. 10k is a little too crispy so that one too.

FI is amazing production wise. my ears dont ring after i listen to it on headphones. most albums do that. ''but the vinyl is gonna be better!'' every fn hipster is shouting that right now!

Matthewc25 wrote: ↑
Fri Aug 09, 2019 8:29 am
So over at Reddit someone got a little extra info on the packaging. So the 79 minute CD might not include the 2 segues. I find that interesting. If it’s true, why wouldn’t they just split the CD into two disks?

Tool's marketing pre and post info dump doesn't know who the hell is driving. This rollout has been pretty bad all around. At this point no one really knows anything. The album is 80 min, 85min, 89min but only 79 on the CD. These are all competing reports.

Here's my educated guess. CD is all songs.....the screen with 'exclusive video' in the package is probably going to play the segues along with video.
Yes, I am the same Greasy from the hubs (remember AMT?)

how do you figure? It doesn’t sound like tool to chop up the segues. They use them to soften to blow of the song before.
Top

rshforgothispw wrote: ↑
Sat Aug 10, 2019 6:54 am
how do you figure? It doesn’t sound like tool to chop up the segues. They use them to soften to blow of the song before.

In order to be able to put 80 minutes of songs on only 1 disc. The segues are probably loaded onto the memory chip in the package that displays the video images.
Yes, I am the same Greasy from the hubs (remember AMT?)

imagine that ? whats this talk about a 85 min cd but then also 79 min cd. somethings gotta give somewhere here.
Top

I think my main criticism of FI is the lack of any real crescendo. Several times throughout is seems to be building to something, but instead of breaking out into a crescendo it either just backs off or continues rolling along in the same mid-range.

The chorus almost gets there, but it kind of backs off. Several times in the second half it seems to be building to something big only to transition into something else that stays in the same range. Adams solo could have gone big, but again, he keeps it in the same restrained range.

For a song about casting off fear it really lacks that big cathartic crescendo moment.


Busty McCracken wrote: ↑
Fri Aug 09, 2019 9:44 pm
One thing I'm kinda hoping for the new album that im surprised hasn't been mentioned is some of the ending to the songs are a little mixed up.

Descending & Invincible both have a somewhat similar climax to say 46&2 with that offbeat hit/mute in unison. FI kinda follows a similar path again. Only a little thing just something I've noticed

I agree, and not just the outros but the slow building intros too. Hopefully some songs get off the blocks quick.


Boldizar wrote: ↑
Fri Aug 09, 2019 10:08 pm
I am trying to hold off listening to Descending and Invincible anymore until launch.

@Moridin what about the outro ? When Maynard sings “ Uveil now, lift away, i see you runnin’...” while Danny is giving one of his best performaces.
I forgot my pen
Top

So Long, and Thanks for All the Tool.
Top

I’d say it might be legit. Apple Music changed track 9 to be the explicit track. Hmmm
Top

Didn’t the one review say FI had an precisely crafted on-ramp and off ramp, meaning it was preceded by a song?
Top

I looked and it was 7 still gonna restart
Top

Track 9 is now marked explicit on Apple Music. Any other people can confirm on a diff platform?
Top
Post Reply
2302 posts