xZ1mM3r wrote: ↑
Wed May 21, 2014 8:30 pm
Why does this thread exist? There is no new album on the near horizon. Why bother discussing the tour of an album that has no details yet?

Listen to All Them Witches
Top

Seams like some tour news soon! Can’t fucking wait for Friday!
All well Whatever, Nevermind
Top

Seams to be busting at the seams
"That's what you get when you argue with children..." -Tyson
Top

Anyone care to elaborate?
Generic triangle avatar lives on.
Top

Dj Nick Fury leaked a couple dates weather there is truth to it I’m not positive but makes sense.
All well Whatever, Nevermind
Top

I missed them at epicenter can’t fucking WAIT
Top

Hoping for a BC date.
go taff!
Top

Hey, this is my old account I can no longer log into. Guess my prediction was wrong.
Top

Aww dude that was you! Man that was a cunt to try refer to ya with. Joops much better
Listen to All Them Witches
Top 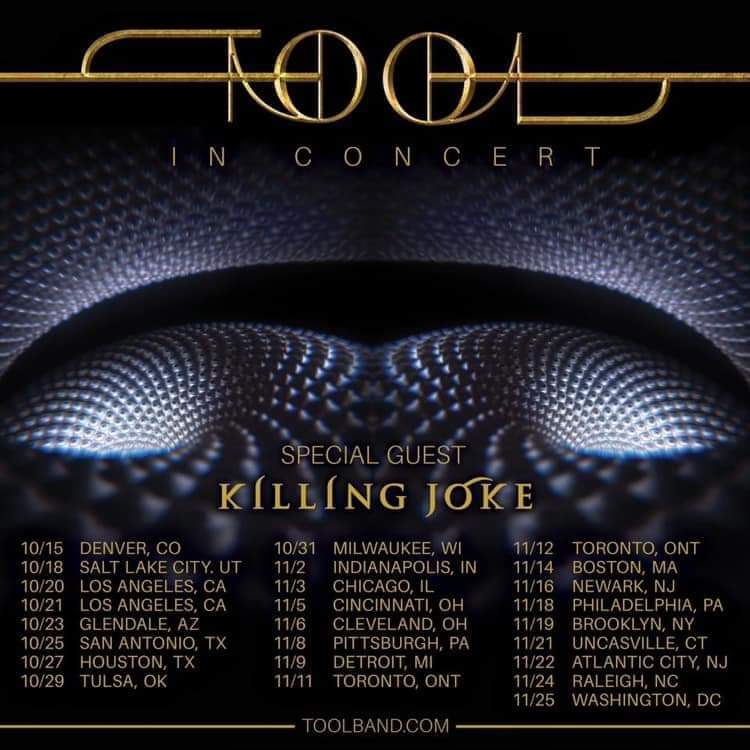 Killing Joke, holy fuck!! Love this band so much.

Now I'm jealous.
- You like noisy music?
- Yes. The louder the better. Stops me from thinking.
- You don't like to think? What do you like?
- Never thought about it.
Top

I hope that Brooklyn show is at the King’s Theater. Both Barclays and Kings are available that night.
“Casual Fan”
Top

Boston and Mohegan here we go!!
All well Whatever, Nevermind
Top

Ill be headed to Denver. Bill you live down there yea?
Top

Welp, Brooklyn show is at Barclay’s. That Atlantic City show is going to be sick. 10,000 seat capacity.
“Casual Fan”
Top

Wow actual TOOLarmy presale!! Hoping to grab a VIP as well but we will see!
All well Whatever, Nevermind
Top

How does toolarmy presage work anyone know
Top

Hallelujah!
So Long, and Thanks for All the Tool.
Top

Where in the heck is the Pacific Northwest leg of the tour?? It’s missing ):
Top

Hell yeah! I'm all over that!
Professor of Lesbian Science
Top

Tickets are on-sale Sept. 6 at 10 am local time, with a limited number of tickets will be available to Tool Army members on Sept. 4. Tool Army information, as well as VIP package details, can be found via Toolband.com.